Bali is one of the most incredible, unique and diverse destinations in the world. Though extensive tourism has caused some areas to lose their magic, there are still plenty of off the beaten path destinations worthy of exploration on this Island of the Gods.

1. Soak in the Balinese Hindu Culture

While Indonesia is primarily an Islamic country (~88% of the country is Muslim), 93% of the population on the island of Bali is Hindu. The Balinese Hindu culture is peaceful and beautiful and the people you’ll meet here are some of the nicest and most trustworthy to be found. One thing in particular that shocked us was their trustworthy nature. Our driver for example didn’t even attempt to collect any payment for our full day tours and airport transfers until dropping us off at the airport on the last day. He simply trusted that we would return each day and pay in full in the end.

I was also shocked at how safe I felt as I arrived and spent the first two days as a solo female. Many people warned me in advance that Bali was not a safe place to be alone, but I would strongly disagree. Granted, I wouldn’t suggest walking around alone at night but don’t be afraid to venture out solo during daylight hours.

2. Take some time to visit the less touristy temples

Pura Ulun Danu Bratan. Beautiful but packed with other tourist!

The temples in Bali are beautiful and definitely worth the visit but the crowds at the ‘postcard temples’ (Pura Tanah Lot and Pura Ulun Danu Bratan) really take away from the experience. We enjoyed the higher Balinese to tourist ratios of Pura Taman Saraswati and Pura Tirta Empul. We visited Pura Taman Saraswati first thing in the morning and were the only tourist there and were able to watch several local women participating in their morning ceremonial offerings.

Just as a note, women who are menstruating are not allowed in any temples in Bali and they will ask you which is somewhat awkward but good to know in advance.

3. Hire a Balinese driver and arrange airport transfers in advance

Arriving alone from Australia at Bali’s Denpesar International Airport at 10pm and walking out into the sea of literally hundreds of anxious drivers flagging me down immediatly made me thankful for Wayan, our Bali guide.  I found Wayan’s company Bali Transport on Trip Advisor and can not sing his praises enough! Wayan arranged multiple airport and hotel pickups for us and was always on time, reliable and most importantly an amazing Bali host! Another HUGE advantage of using Bali Transport is that Wayan is an incredible photographer and will happily photograph your tour for you and give you all of the photos at the end for free. Many of the photos here are compliments of Wayan.

Most day tours in Bali are private, fully customizable and very affordable! A cheaper end all day tour can be found for roughly $40-$45 USD and can easily be arranged upon arrival in Bali. Nearly every taxi driver will offer you his day tour services. Our tour with Wayan was on the higher end coming in at around $70 USD per day but the photos and services Wayan provided were without a doubt worth the higher price tag.

Wayan also has a beautiful guesthouse at his home in Chenggu. We didn’t stay here though looking back I wish that we had.

4. Visit as many spas as possible

A fish pedicure in Ubud

This is something I wish we had done more of. There are spas all over Bali and the prices are incredible. I did splurge at The Samaya in Seminyak while I was solo and while the experience and view were incredible, looking back it was unnecessary considering the number of budget friendly options. I also tried BodyWorks which is in Seminyak and was much more reasonable albeit modest than The Samaya.

The fish pedicure in Ubud was also a fun yet interesting experience though once is probably enough for me.

Prior to arriving in Bali, I had already researched all of the ‘safe’ and highly reviewed restaurants in order to steer clear of the infamous “Bali Belly.’ I had no intentions to deviate from my plan but after a long day touring, our empty stomachs were calling and the smells of grilled chicken satay luered us in. I was pretty skeptical about this one,  but I decided to put my skepticism aside and thank God I did. This lady cooked one of the best meals I had in Bali! StreetFood has a great guide to Bali’s street food scene and I wish I had read this prior to our trip.

The one pre-reseached restaurant that we would highly recommend is the Yellow Flower Cafe in Ubud. This is a true hidden gem that you’ll only only reach after wandering down a winding and beautiful path through rice patties and local homes. It’s family owned and run and everything on the menu is organic, freshly prepared and absolutely wonderful. I could have gone here every single day! 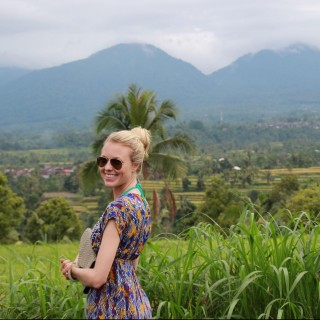